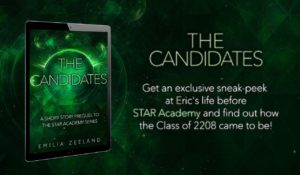 Today I’m here with M. Greenhill–an inspiring Wattpad author, who decided to take the plunge and start self-publishing. Her novel Masked is a treat for fans of paranormal fantasy and werewolves. It’s sizzling synopsis starts like this:

An invisible enemy. A deadly virus. A human hacker and a Werewolf alpha are their only hope. That’s if they don’t kill each other first.

Don’t you want to read more right now? I know I do. But today I’m even more excited to hear about M. Greenhill’s preparations for the brave new world of self-publishing.

Hi M., thanks for joining me!

M: It’s great to be here, and thanks for inviting me for this chat, Emilia.

Me: It’s a pleasure. So how or rather when did you make the transition from thinking of your writing as a hobby to deciding to go professional?

M. Like many, I’ve always wanted to have a story published. When my father passed away in early 2017, I decided that life is too short, and I needed to do something about my life long dream. I then spent the next few months learning everything I could about what it takes to self-publish a book, as well as getting Masked into a state I felt comfortable to publish.
Masked has been out in the big wide world for a couple of months now and it still feels surreal having an actual product out there. Having the paperback helps to make it more real and I still pat the book every now and then… Don’t judge. I dare you not to do the same. LOL!

Me: Haha, brilliant! I bet I’ll catch myself doing that, too. You’re such an inspiration for me, and speaking of that, who is your indie author role model? Why?

M. There are quite a few out there so I won’t name them all. However, one of them is Elicia Hyder, an author I met through Wattpad. She is such an inspiration and a wonderful writer.

Me: Oh, I’ll have to look her up and invite her here 🙂 So, when you first got started what was your game plan? Did you have a specific approach to the wild jungle of the self-publishing universe?

M. LOL! Like most other first time self-published authors I had no idea what was involved. So, I did the most logical thing… started Googling. Let me tell you, there are some wonderful resources out there. I also discovered that indie authors are so helpful and always willing to impart information.
To further my knowledge, I joined Facebook groups and did a few online courses. The more I learned, the more I realized just how much work was behind getting a book out there. When you are an indie author you need to learn to also be a web designer, publicist, accountant, business manager, marketer, editor, graphic designer, the list goes on.
There’s also a lot to learn about how you get your books out on all the platforms. I live in New Zealand and needed a US tax number in order to sell on some of the platforms. This is a convoluted process and I had to phone the IRS at two o’clock in the morning just so I could get them first thing in the morning, and not wait in a ‘priority queue’ all day. In my wildest dreams I never thought I’d have to phone the dreaded IRS. ?
The great thing about self-publishing is that you have control. The bad thing about self-publishing is that you have control. Now I know that sound weird, but it is both a positive and negative.

Me: I’m starting to feel that pressure already! What were your initial expectations? Would you say you were too optimistic or pessimistic now that you’ve been through the experience?

M. To be honest, I don’t think I had any initial expectations. My goal was to publish Masked and make it look and feel as professional as I could make it within my budget.
While having your book reach the dizzying heights at the top of the charts is everyone’s dream, I was realistic to know that is never going to happen for a debut novel, from an unknown author. The fact that I made a few sales was a bonus.

M. Now that I have been through the experience, there are some things I would do differently.
Pre-Orders – I wouldn’t have preorders. It turns out that the preorders do not count towards your ranking on launch day. Depending on how many there were this could make a huge difference to the Amazon Algorithm.
Reviews – Had I known better, I would have sought reviews from bloggers prior to launch. This also helps give your book a bit more credibility.
Releasing so close to Christmas – Just don’t. That’s all I can say on that.

Me: All good advice! Ok, it’s time to go into the nitty-gritty: wide or KU? How did you make the decision? Do you think you’d ever switch for a new series?

M. That’s always the big question. To KU or not to KU? Most first-time authors are recommended to go into KU to allow them to build an audience.

When I launched Masked, I went wide. This was for a number of reasons:
• I had people within my launch team who didn’t purchase from Amazon and used other platforms.
• I knew eventually that I was going wide so wanted to learn about how the other platforms worked
• I also wanted the possibility of having my book available in the local library. Something that is not possible if I’m in KU.
• I will be looking to increase my portfolio of books and wanted to learn the ropes before the second and subsequent books came out. I felt it was better to make the mistakes right at the beginning before developing an audience. When you don’t have one, they can’t see how much you screwed up at the beginning ?

Me: I think it makes sense to focus at first and expand as you go on. Great insights! So, when did you first join Wattpad and what were your publishing aspirations at the time?

M. LOL! At the time absolutely none. I didn’t think I was good enough. I posted to Wattpad to see if there was a readership for my stories. Writing is a very isolated process and we often overthink things… How will the story be received? Will anyone read it? Am I good enough? Is the story interesting?
Posting to Wattpad allowed me to realise my stories weren’t so bad and I might actually have an audience for my writing.

Me: In what ways has your Wattpad audience helped you grow as a writer?

M. The Wattpad audience has allowed me to be more confident in my writing. It has also shown me that my odd combination of genres in a story does have an audience.
It has also given me the opportunity to communicate directly with the readers. Something that is not normally available to authors.

I have also met some wonderful authors through Wattpad. Through them I have improved my skills as a writer and learned how to better use social media to communicate with others within the community.

Me: Did your readers follow you over to other platforms like Amazon, Kobo, iBooks? Did they help in other ways during the launch?

M. In general, the Wattpad readers do not follow authors to the Amazon, Kobo and iBooks platforms. Even if you have thousands of readers and followers on Wattpad, it does not translate to sales once you publish. Authors transitioning to self-publishing from Wattpad, will need to grow their audience from scratch.

Saying that, I was very fortunate to have a large portion of my launch team originate from Wattpad. Without them, the launch wouldn’t have been as positive an experience as it was. They helped spread the word through social media, supported my Thunderclap campaign, and left reviews on the different platforms.

Apart from not freak out too much over things I couldn’t control, I knew I needed to build my visibility. With that in mind, during the launch I made sure my website was updated, set up all my amazon author pages and worked on my amazon landing page for Masked.
At this early stage, Amazon was always going to be the platform I had the most sales on (if I was going to get sales). So I knew this needed to be worked on to make sure it looked as appealing to anyone who stumbled upon it.

M. Without a doubt it’s Joanna Penn, Mark Dawson and Jane Friedman. The information they share is astounding. I recommend also listening to Mark’s and Joanna’s podcasts.

M. Start writing your next book. You cannot rest on the laurels of one book and you certainly can’t build a long-term audience without more books in your portfolio. The other thing is to start a mailing list. This is an author’s best asset, and shouldn’t be underestimated.

M. I generally keep in touch with my audience through social media. The Wattpad audience is though a combination of Wattpad and social media. I am also trying to build up my email list and will also be communicating a lot of what I do through this channel as well.

M. By the end of 2018, I hope to have the first three books in the Masked series published as well as a novella prequel to Masked as my freebie. After that, I would like to target 2 – 3 books per year. However, it is all going to come down to time availability. With a family and a full-time career, I am often challenged to find time to write.

Me: You’ve done a spectacular launch, in my humble opinion, and I have no doubts that you’ll reach your next goals! Thanks so much for sharing your experience with me today; that was great!

M. Thanks for having me Emilia. And good luck with your publishing endeavours. If anyone has any other questions on any of the aspects of self-publishing, they can reach me though facebook, twitter or email